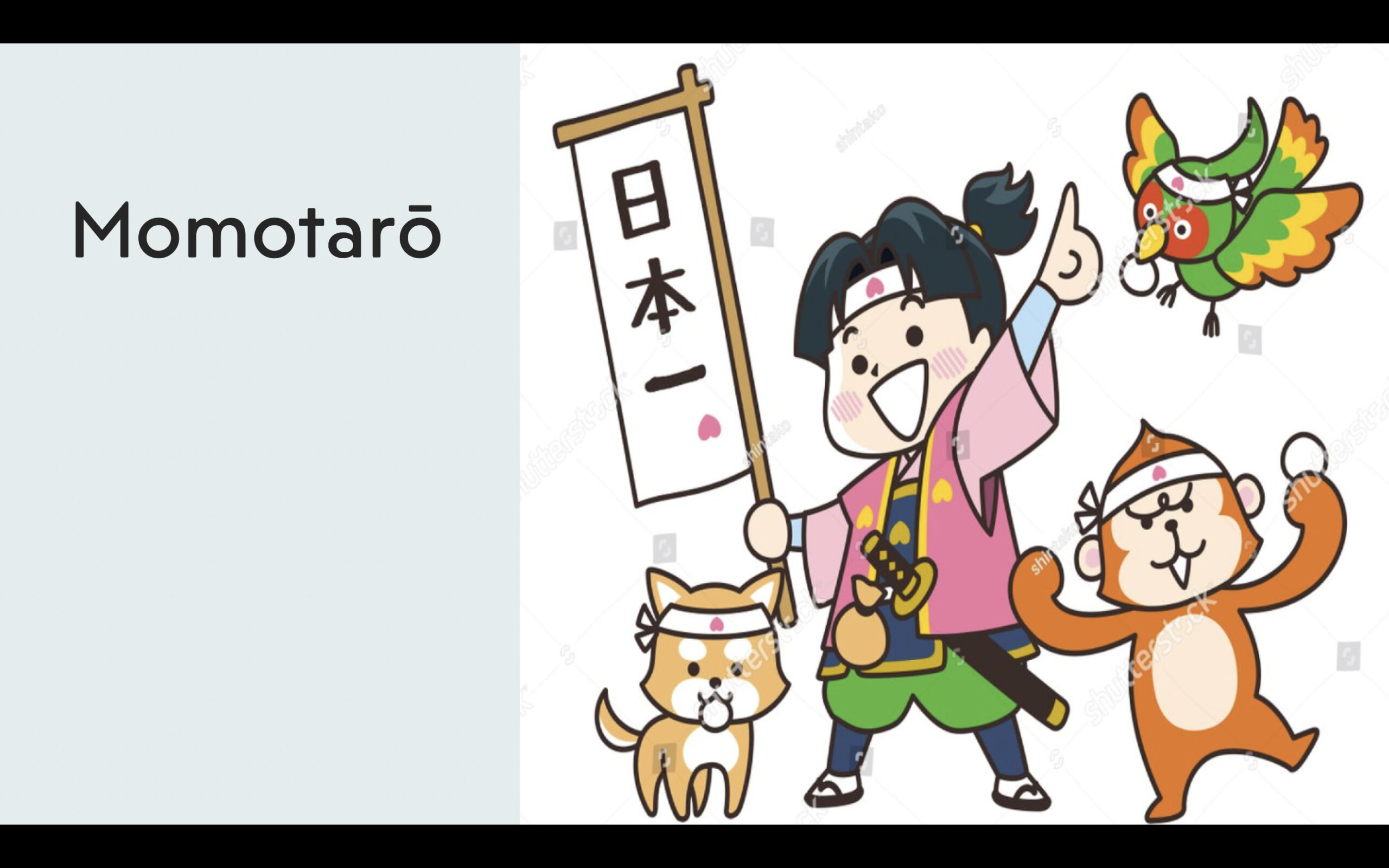 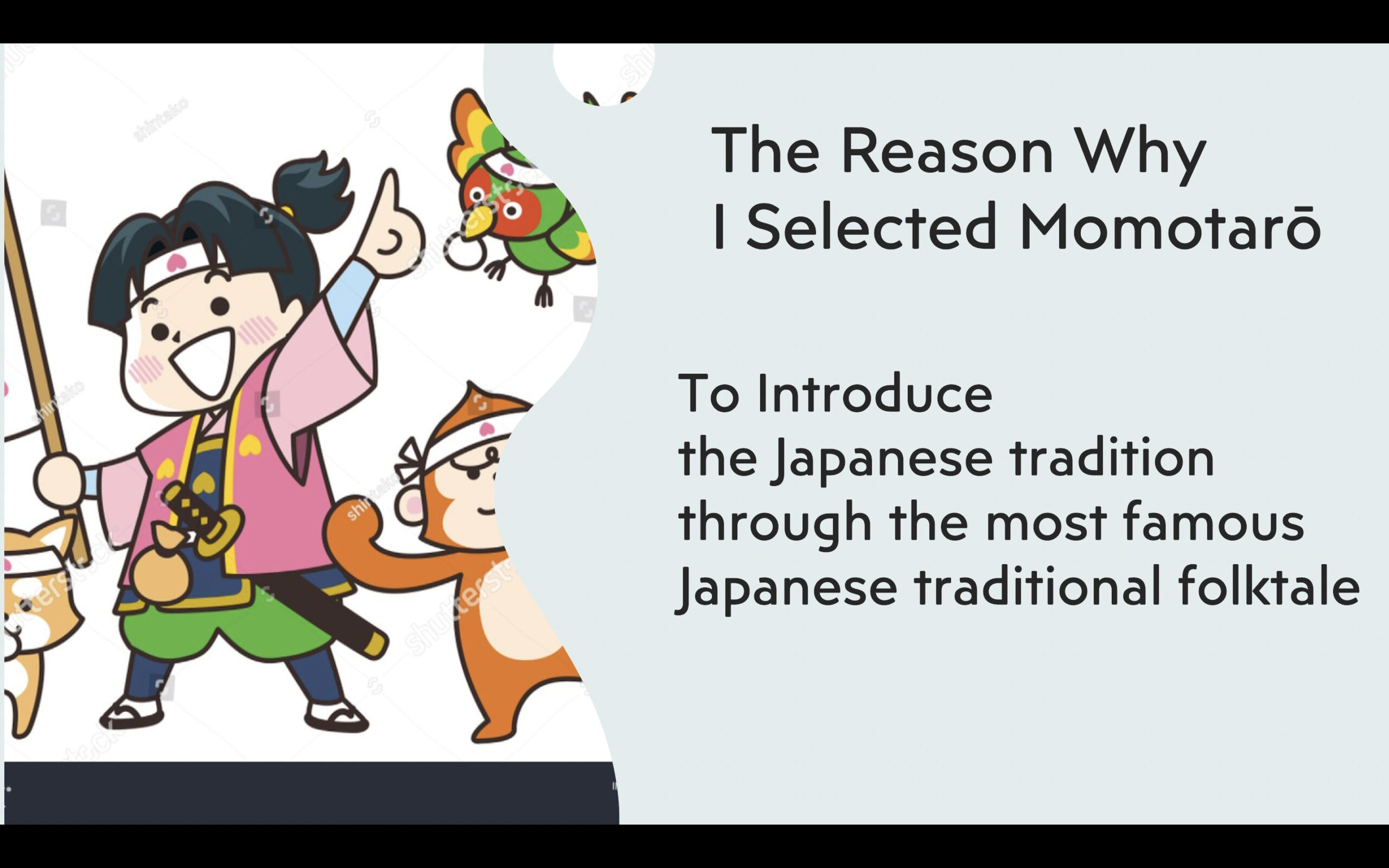 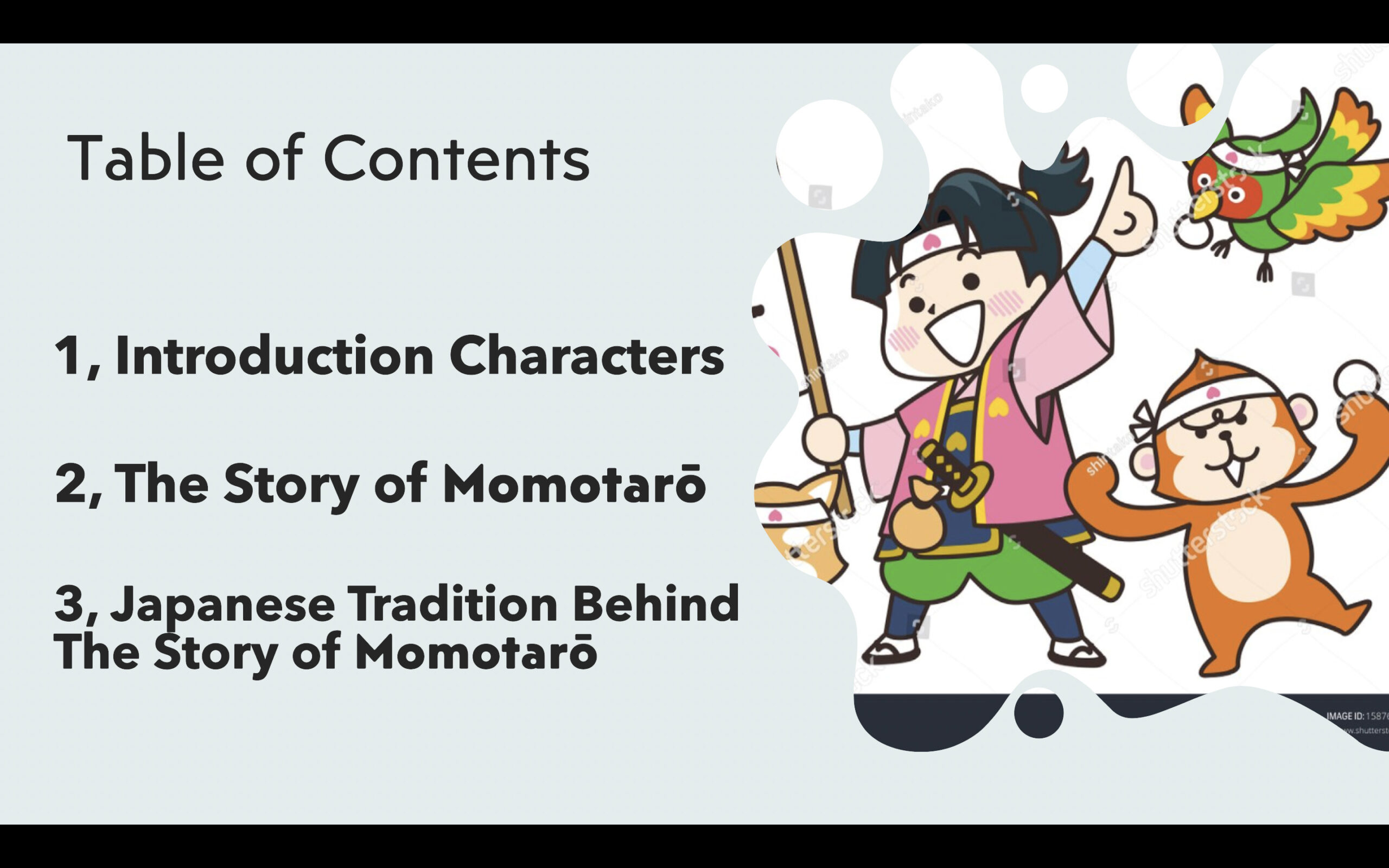 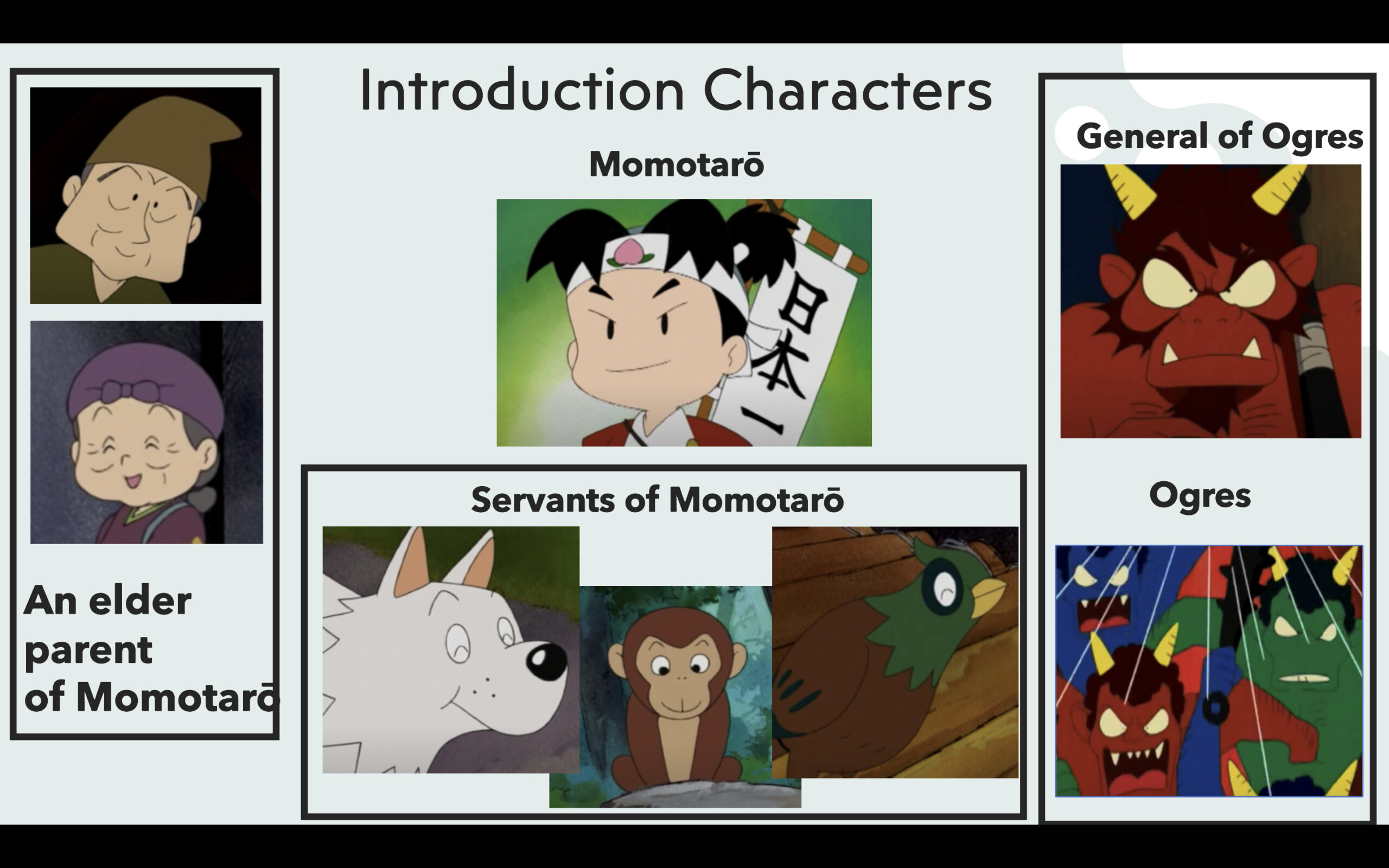 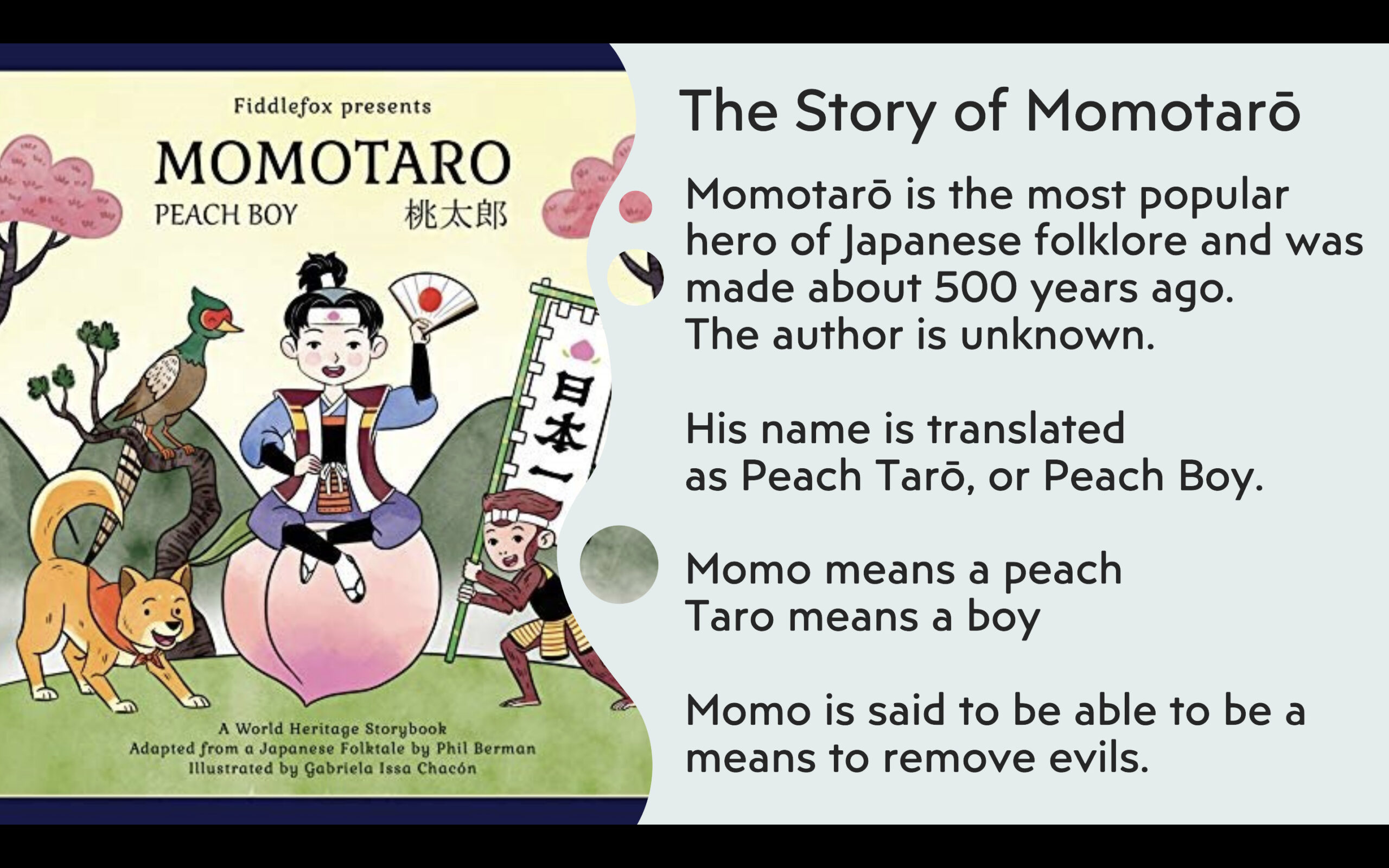 Before talking about Momotaro, I will explain about the Momotaro shortly. Momotarō is the most popular hero of Japanese folklore and was made about 500 years ago. ​The author is unknown.​ His name is translated​as Peach Tarō, or Peach Boy. ​Momo means a peach​. Taro means a boy.​ Momo is said to be able to be ameans to remove evils. ​ 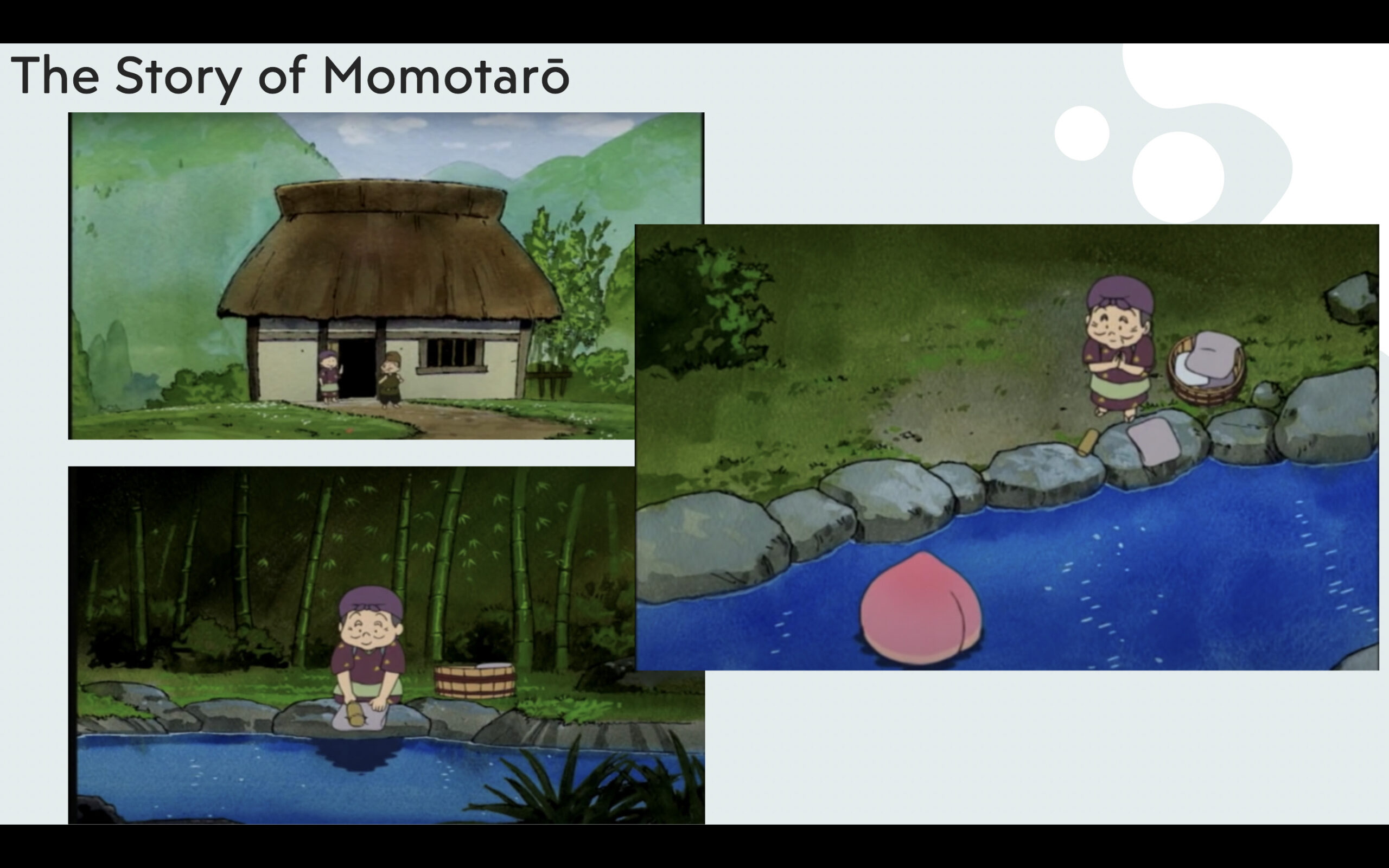 Once upon a time. There lived an elder parent. An old woman was washing clothes in a river. Then, a giant peach was carried by the river. She picked up the peach and brought it back to her home. 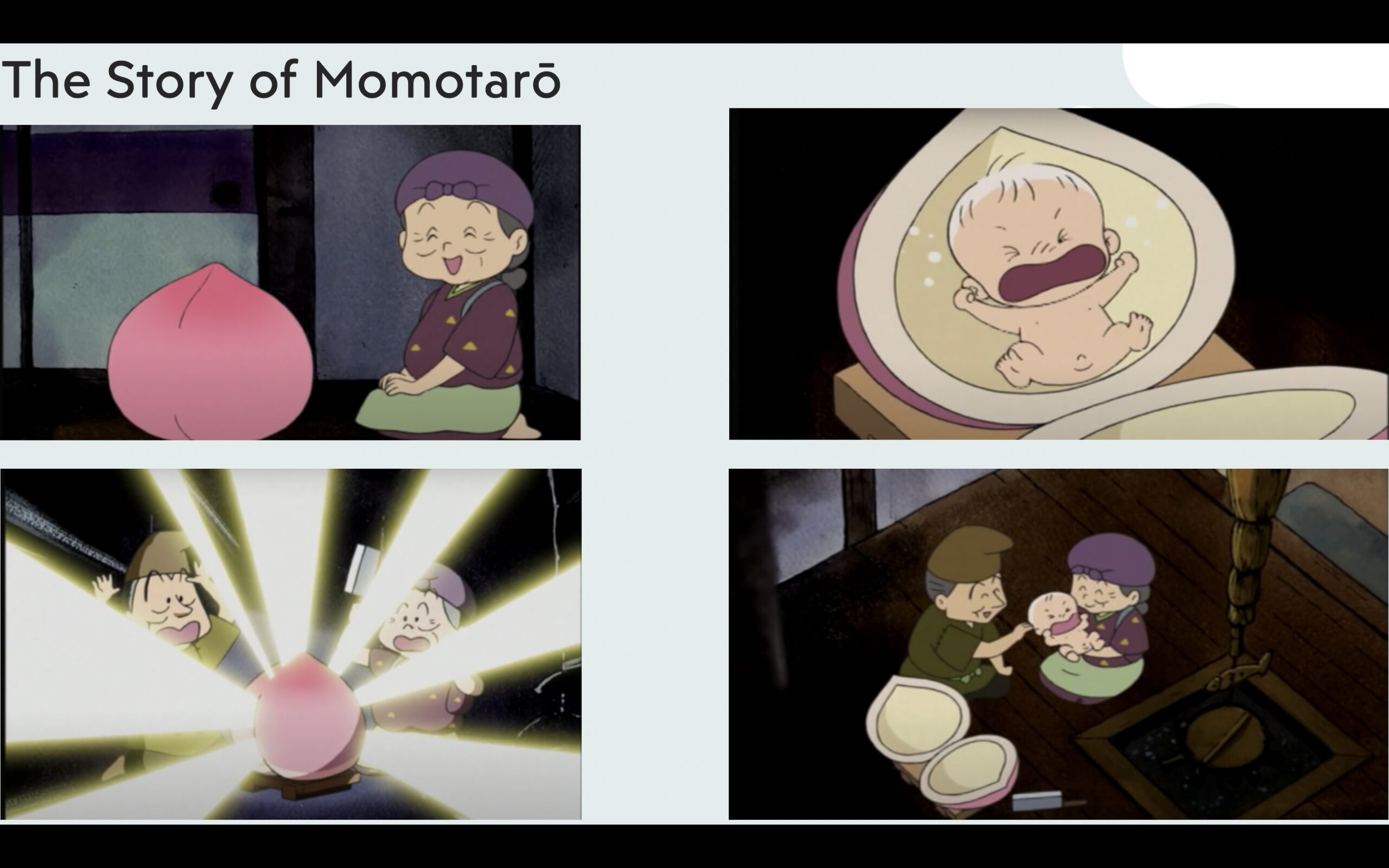 As she began to cut the peach to eat it, then, A boy appeared from inside of the peach. They decided to take care of the Boy and named him “Momotaro.” Momotaro grew so quickly and started to be strong, and smart with a very kind heart. 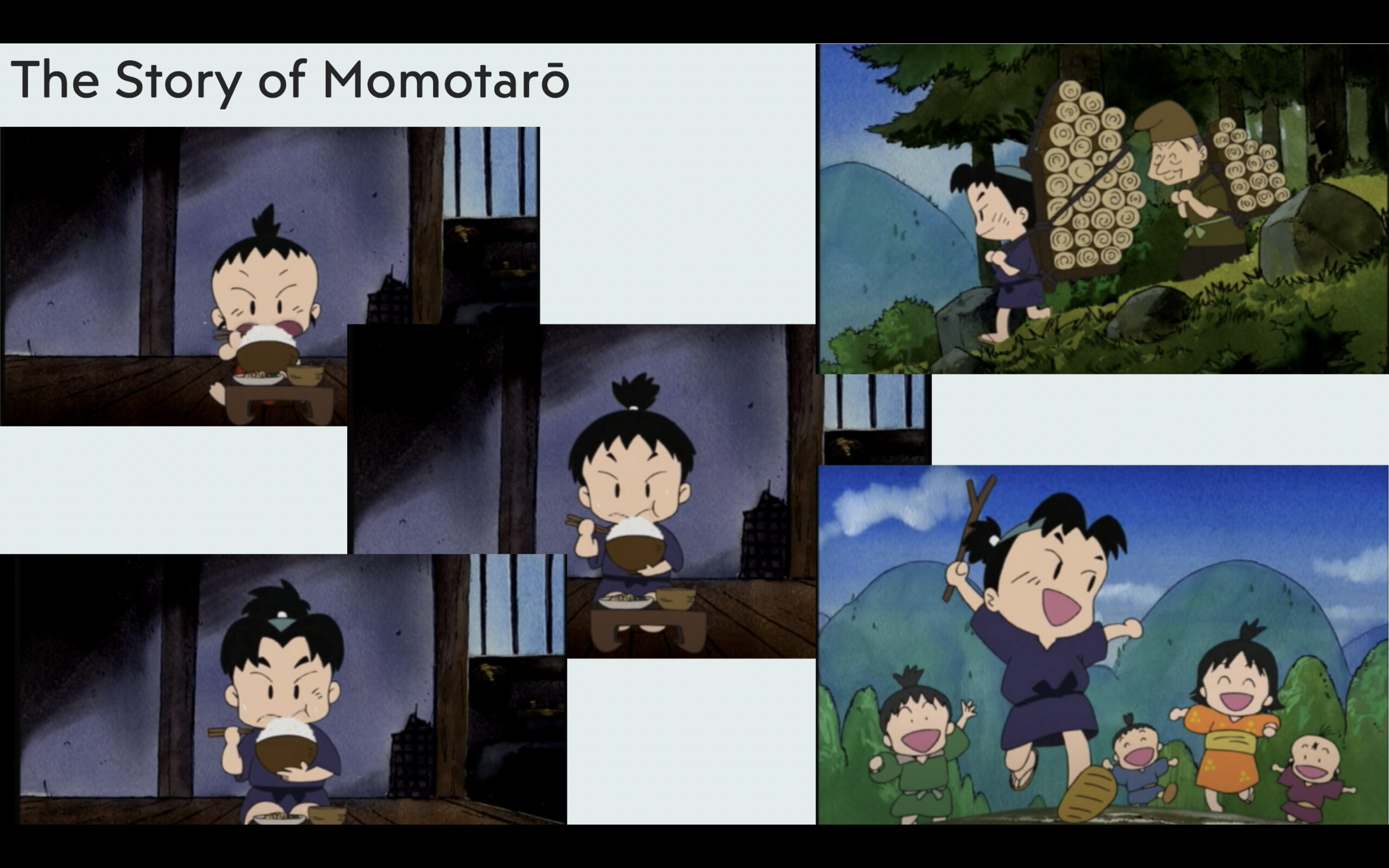 One day, the village treasure was stolen by ogres. Heading from the notice from elder parents, Momotaro decided to go to the island of the ogres to take the treasure back. 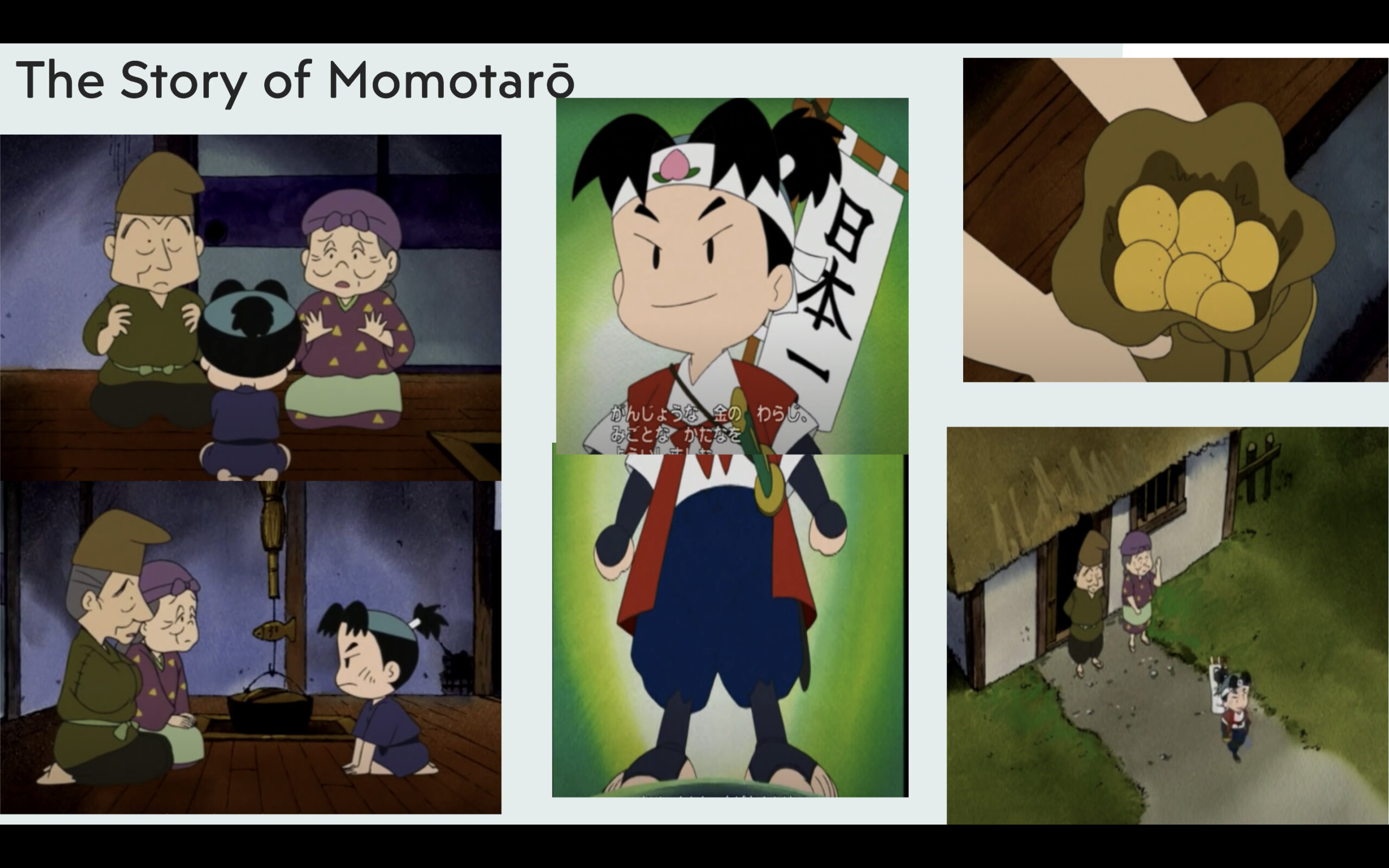 First, an elder parent convinced not to go but, they allowed to go to the island. So, they gave Momotaro a set of clothes and a sword. And, the old woman handed him a bag of Kibi-Dango dumplings (Kibi-Dango​ (dumpling) is ​a type of Japanese traditional sweet or snack). Then, Momotaro set off to conquer the ogres. 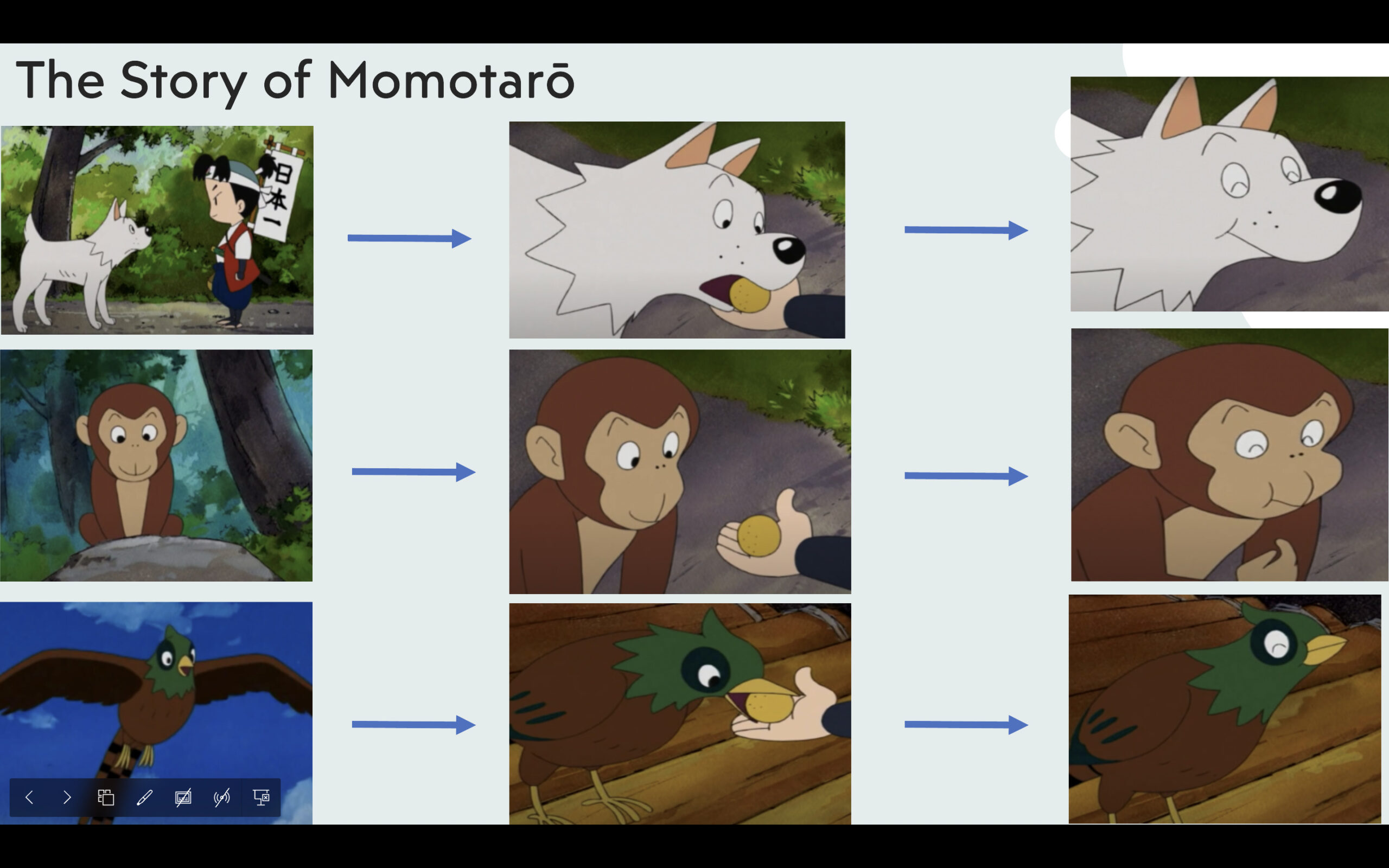 On his way to the island of the ogres, Monotaro encountered a dog, a monkey, and a pheasant for each, and they asked to get one kibi-Dango. Then, Momotaro gave one kibi-dango for each of them, and they decided to follow on his journey. 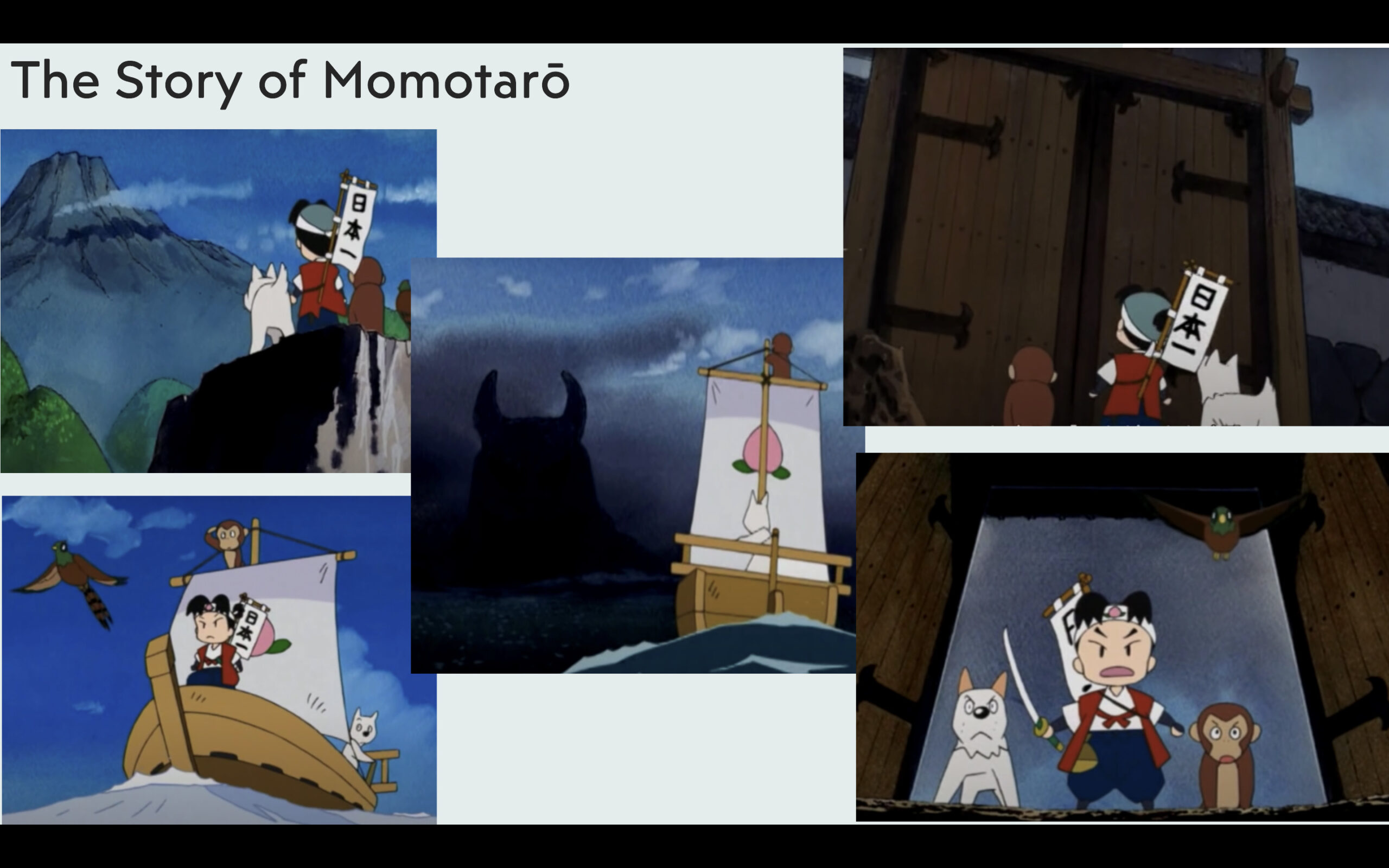 Momotaro and his group went over many mountains, through the valley, and set sail for the island. Finally, they arrived at the island of the ogre, and Momotaro entered the gate and started to attack to ogres. 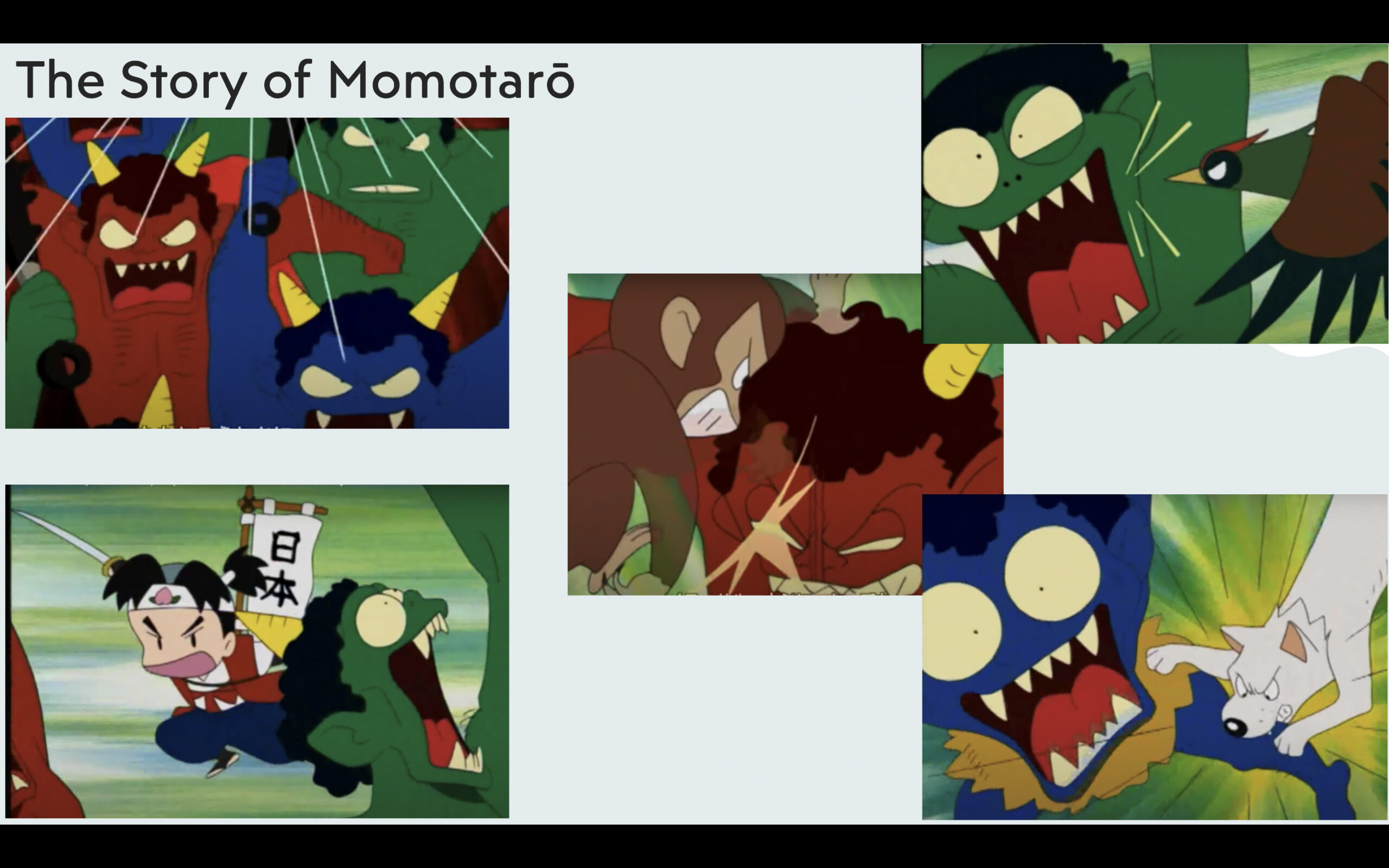 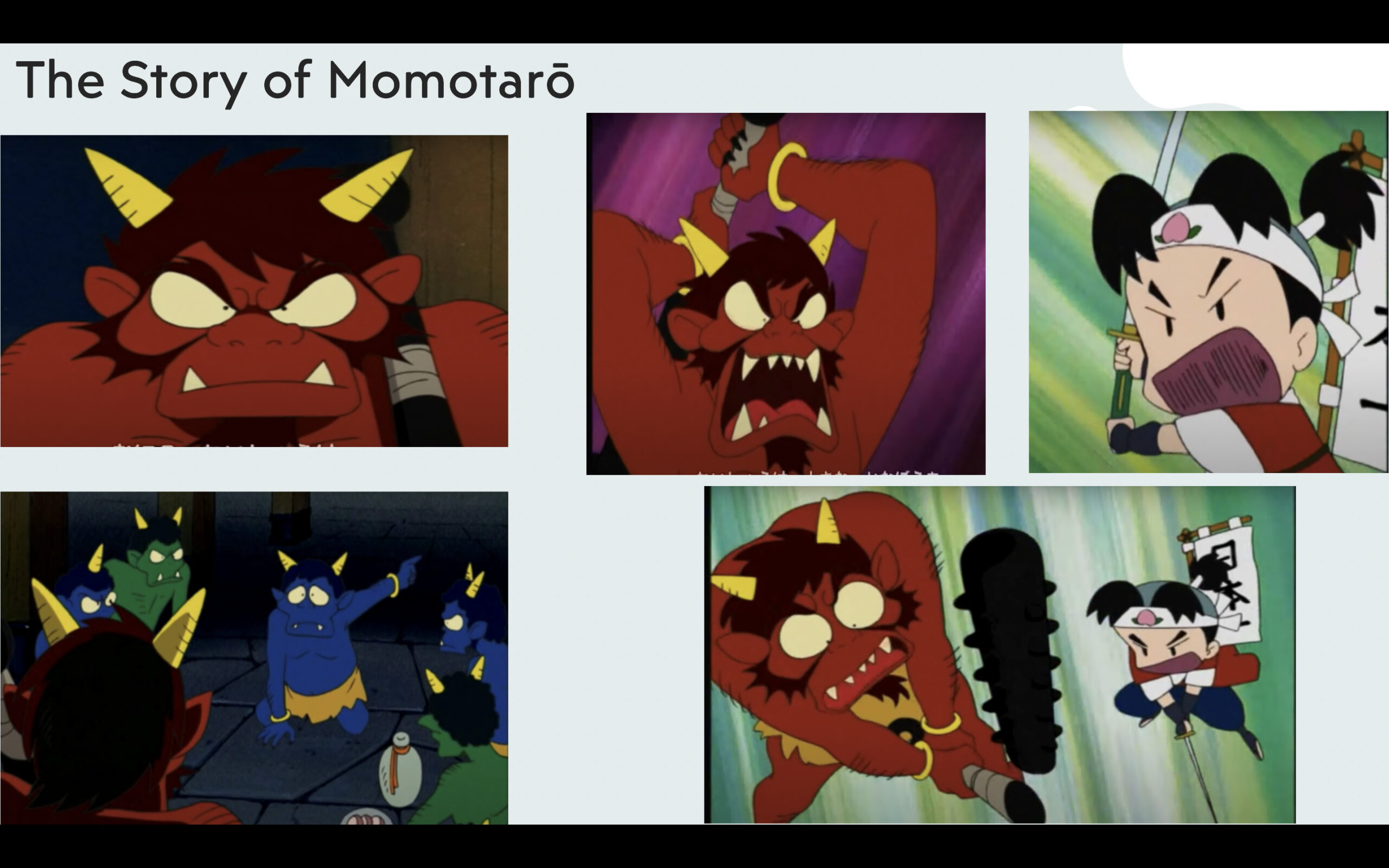 Back in the fortress of the island, the ogre’s General was having a feast. Monotaro kicked the door in and tried to fight with the general. The result was that Momotaro defeated the General. 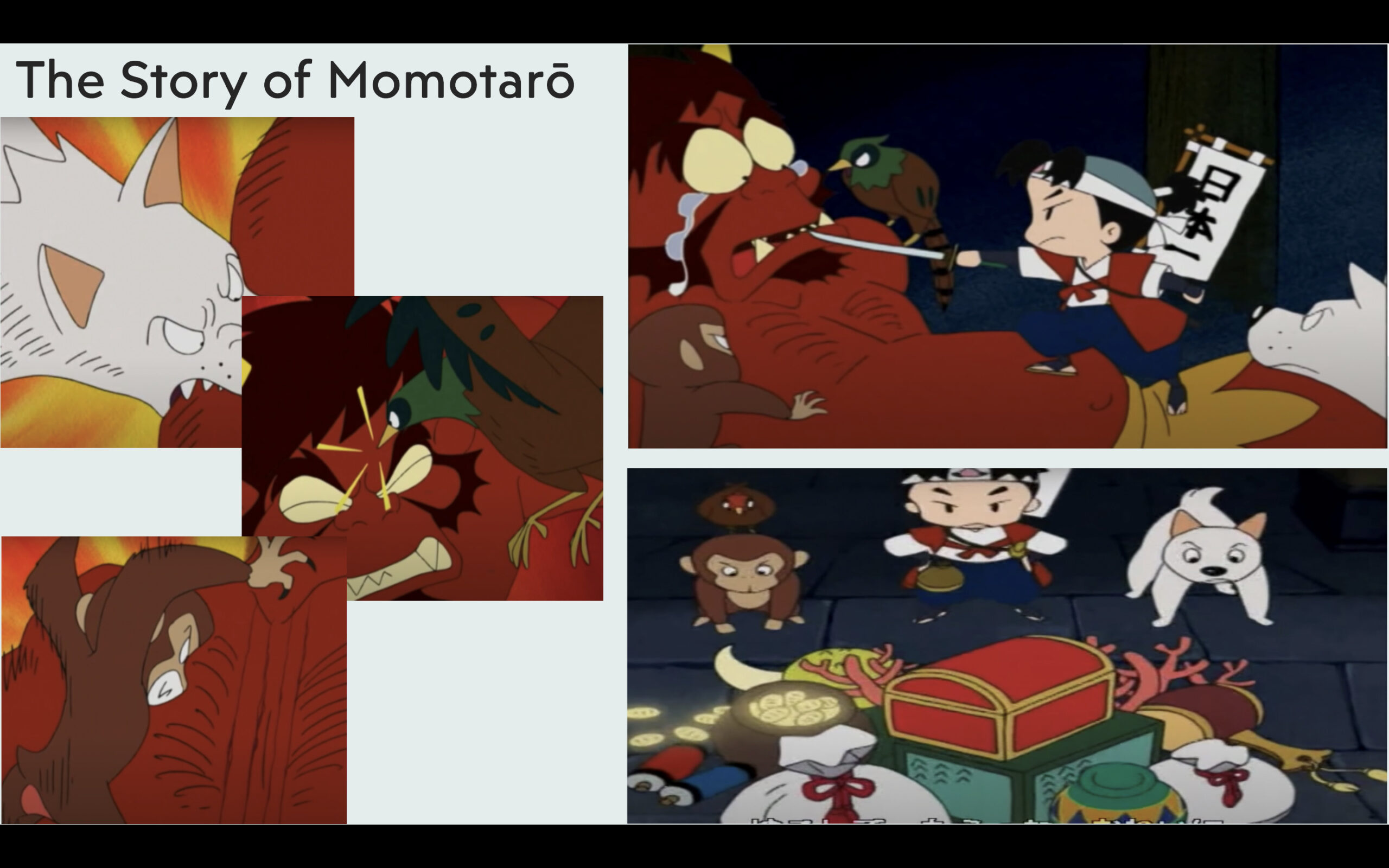 But, Momotaro spared ogres’ life instead of conditions to promise to stop making people suffer and to be good from now on. Then, Momotaro got back the treasure. 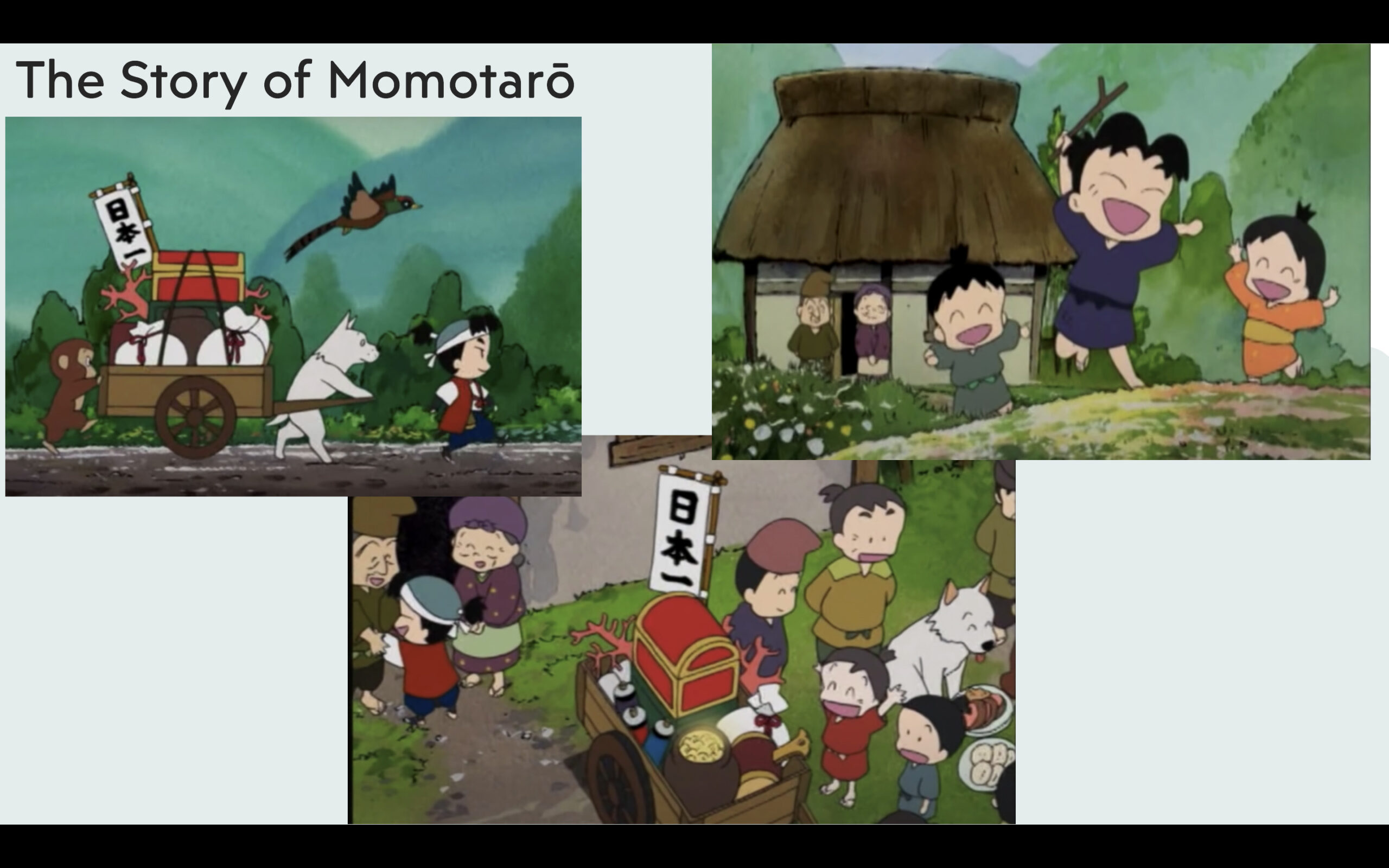 Momotaro and his servants went back to their home and shared the treasure with all the villagers. From that day forward, the ogres never bothered anyone again. And elder parents, Momotaro, and all the villagers all lived happily ever after. 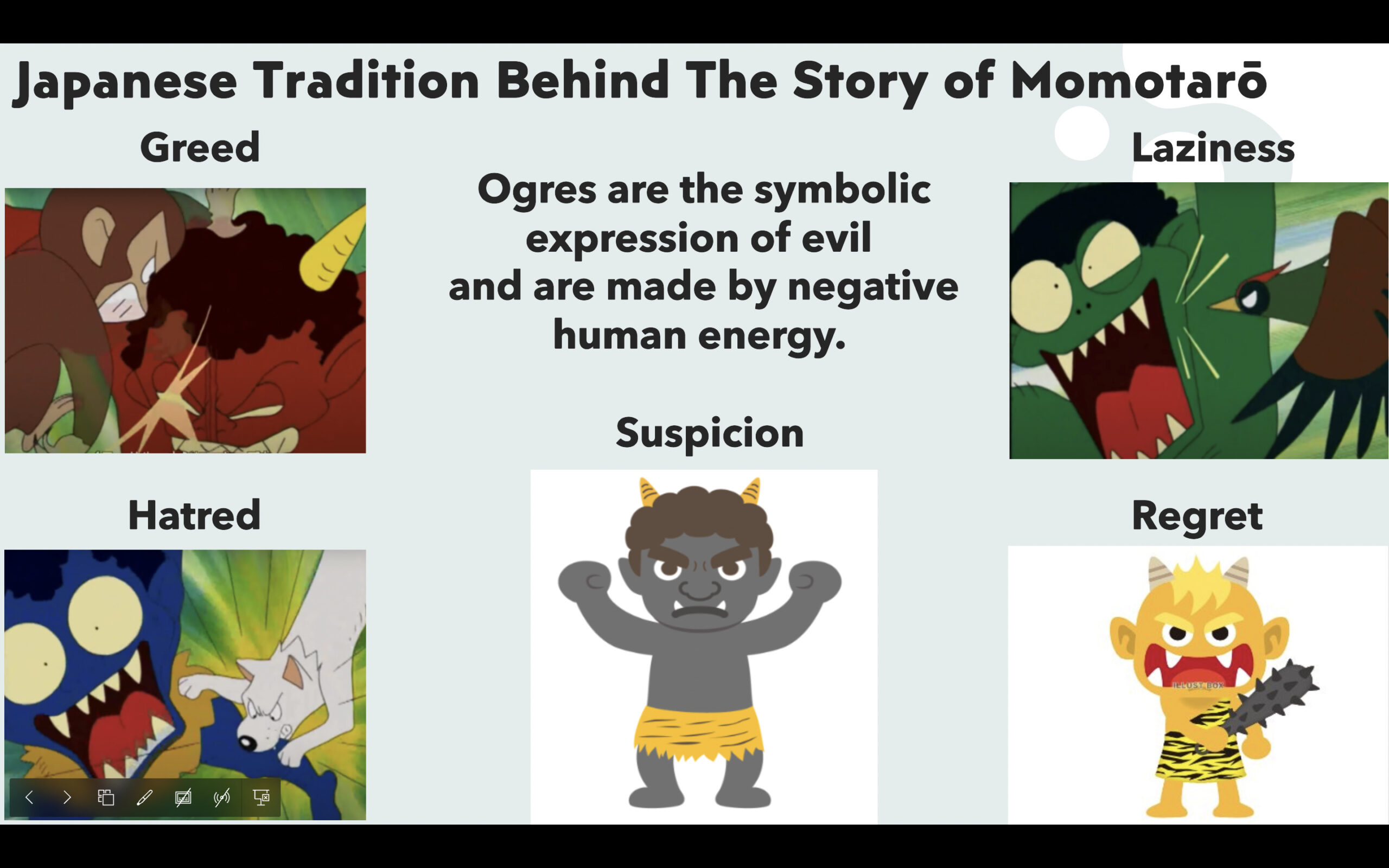 This is the last chapter – Japanese Tradition Behind The story of Momotarō​. You can see there are five colors of ogres, and they have a meaning for each of them. Red means greed, blue means hatred, green means laziness, yellow means regret, black means suspicion. It is said ogres are the symbolic expression of evil ​and are made by negative human energy. 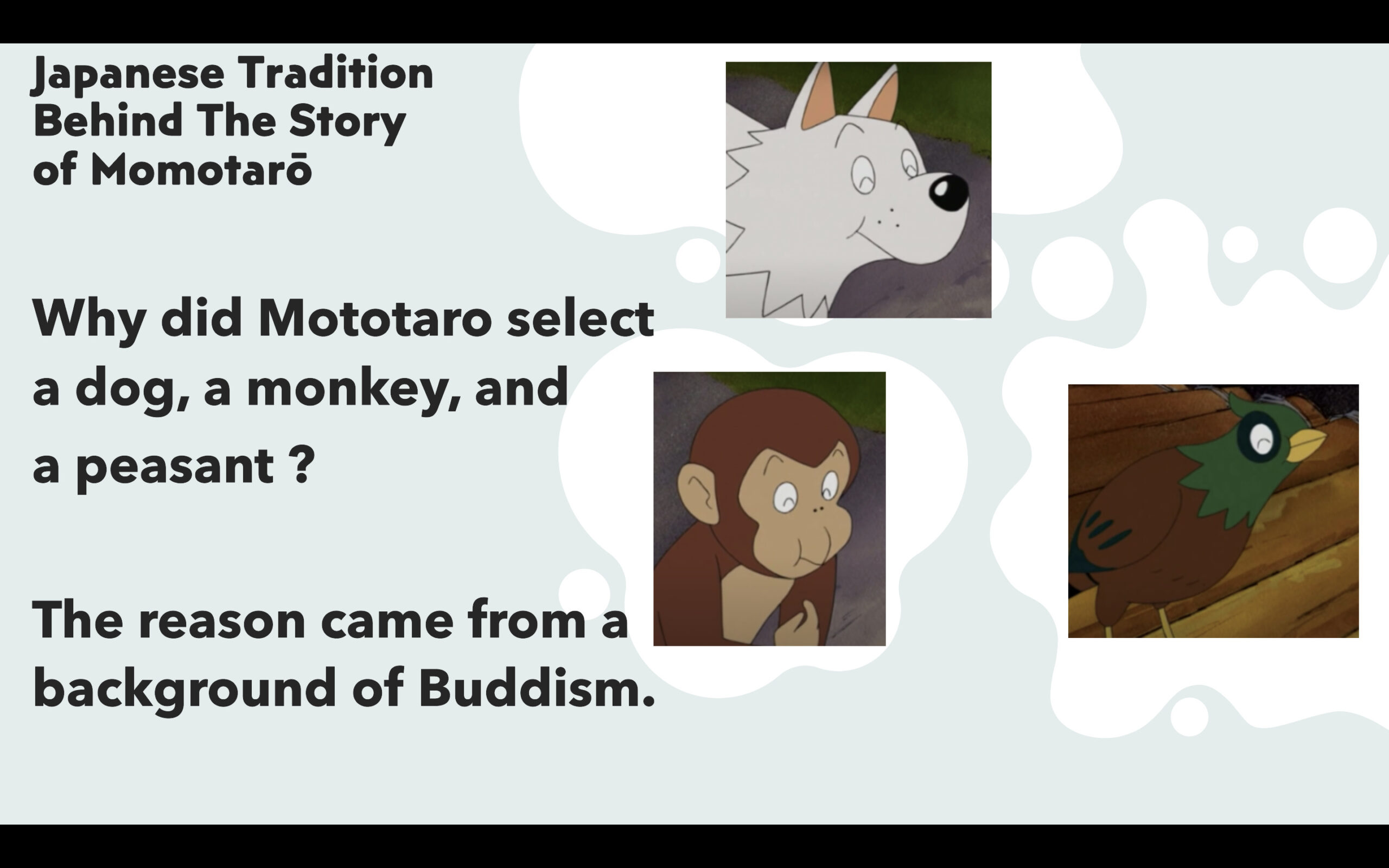 You might wonder why did Mototaro choose a dog, a monkey, and ​a peasant? Because if I was Momotaro, I would choose a tiger, a hawk, a gorilla. But, there was a reason why Momotaro selected them. The reason came from a background of Buddism. ​ 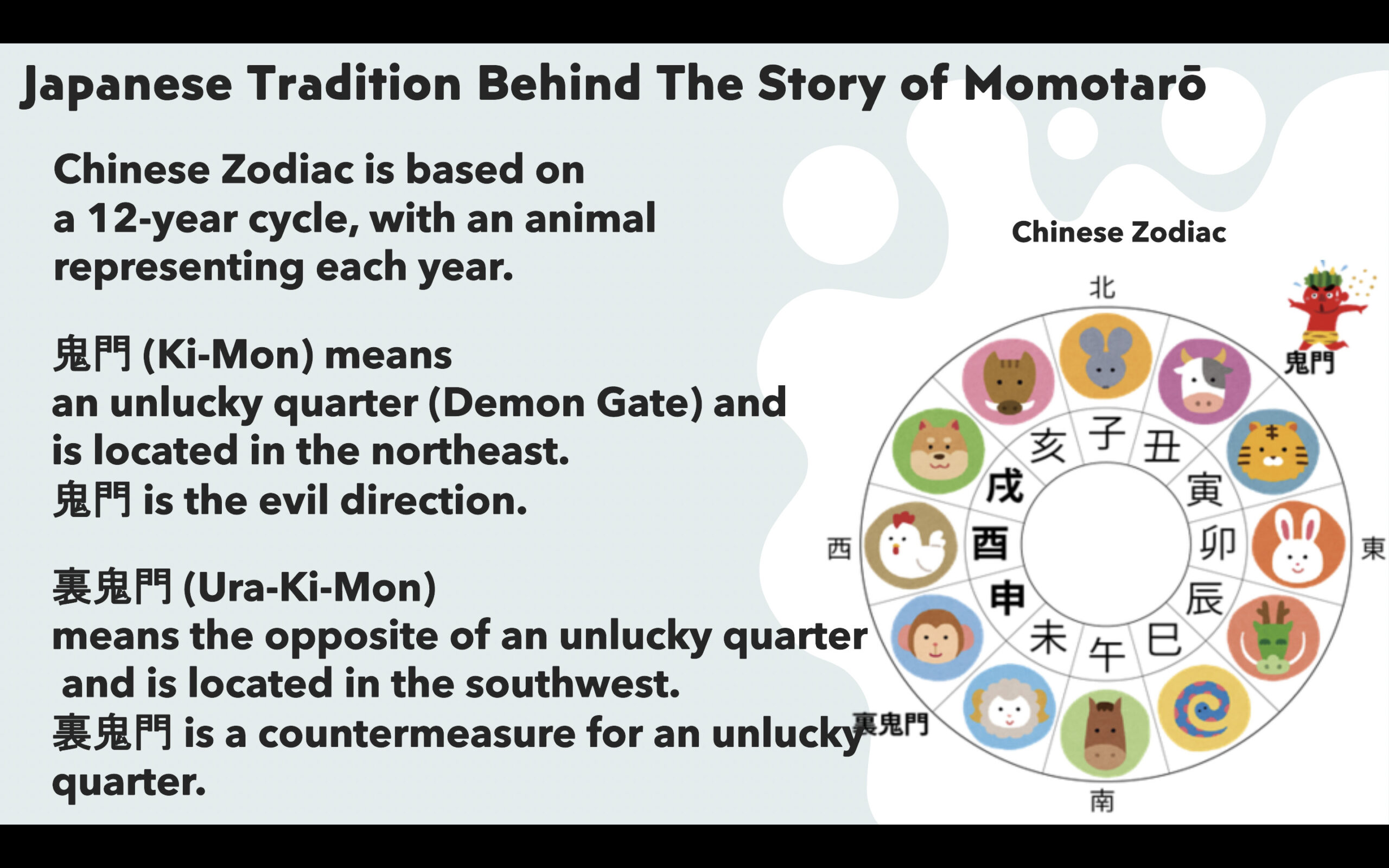 You can see this picture ,and it is called the Chinese Zodiac. It is based on a 12-year cycle, with an animal representing each year. You can see there is an ogre in the upper right of the Chinese Zodiac. This direction is called Ki-Mon. 鬼門 (Ki-Mon) means ​an unlucky quarter (Demon Gate) and ​is located in the northeast. ​鬼門 is the evil direction. ​You can see the opposite of Kimon, there is a dog, a peasant, a monkey. This direction is called Ura-Ki-Mon. 裏鬼門 (Ura-Ki-Mon) ​means the opposite of an unlucky quarter​ and is located in the southwest.​ 裏鬼門 is a countermeasure for an unlucky quarter. So, that is the reason why Momotaro selected a dog, a peasant, a monkey because they are effective for ogres. Besides, I told that momo could be a means to remove evils in past Japan. 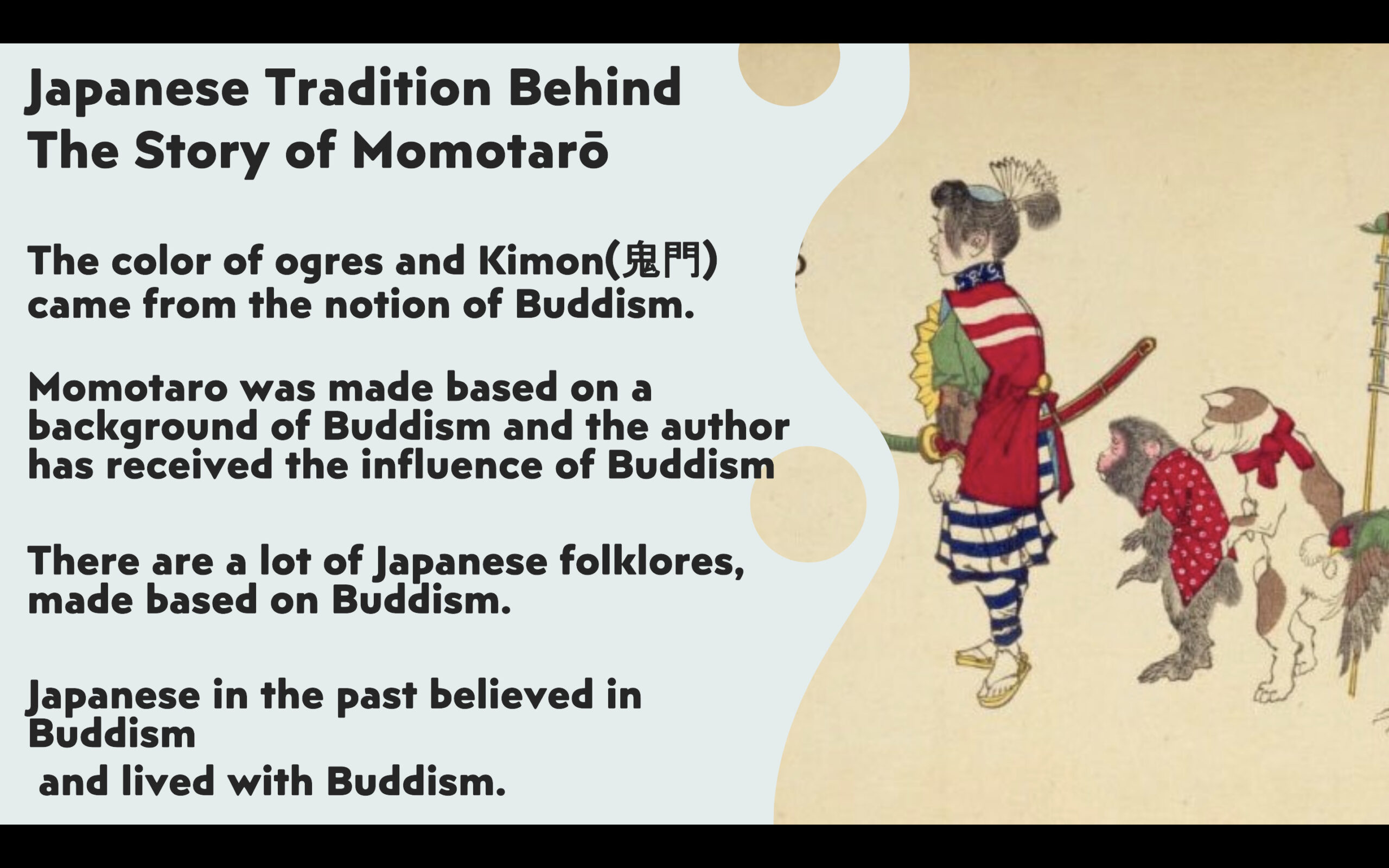 The color of ogres and Kimon(鬼門) came from the notion of Buddism you can guess. ​Momotaro was made based on a background of Buddism, and the author has received the influence of Buddism​. There are a lot of Japanese folklores, made based on Buddism, actually. ​We can know that Japanese in the past believed in Buddism​ and lived with Buddism. ​ 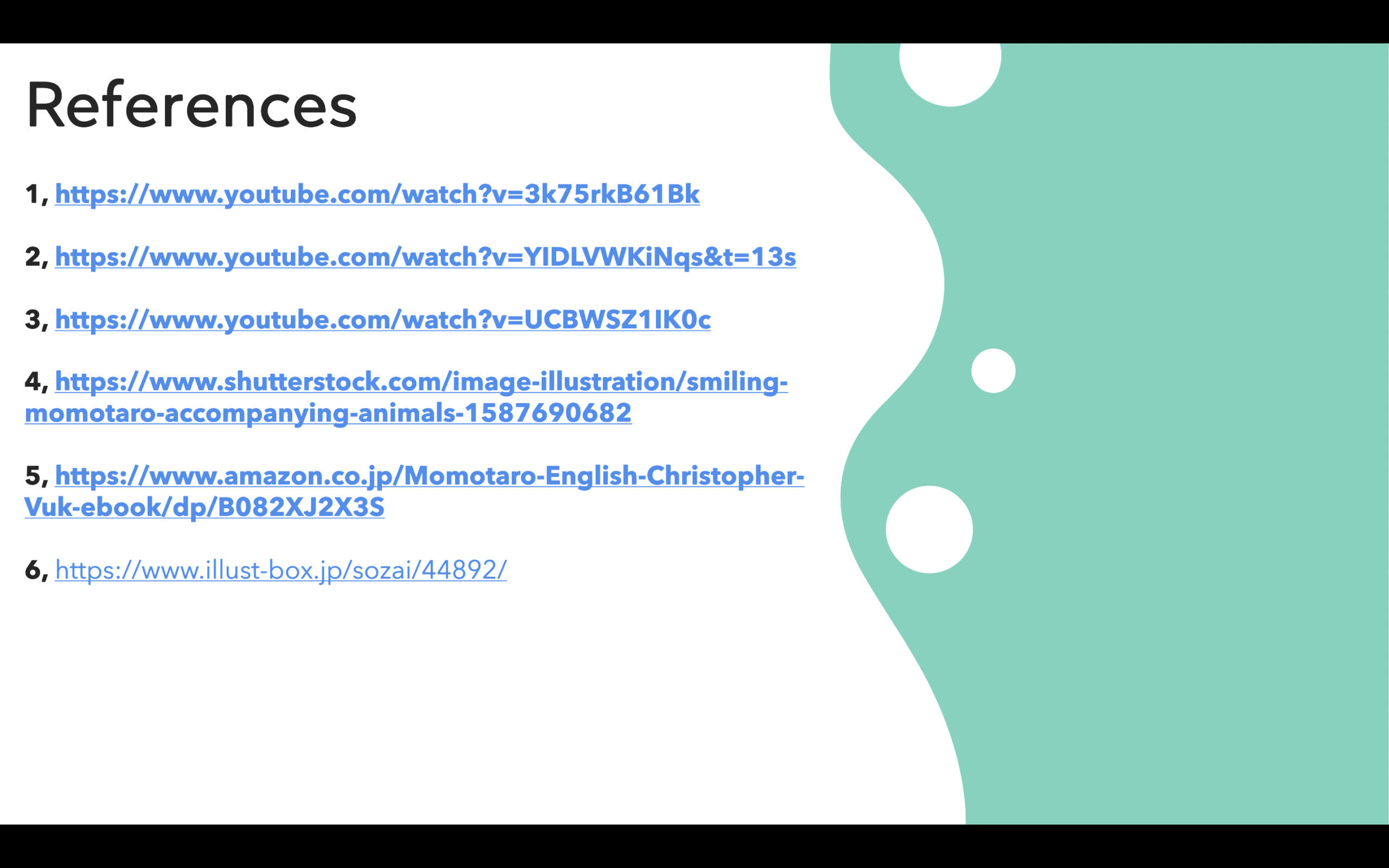 There are references, and I will finish my presentation. 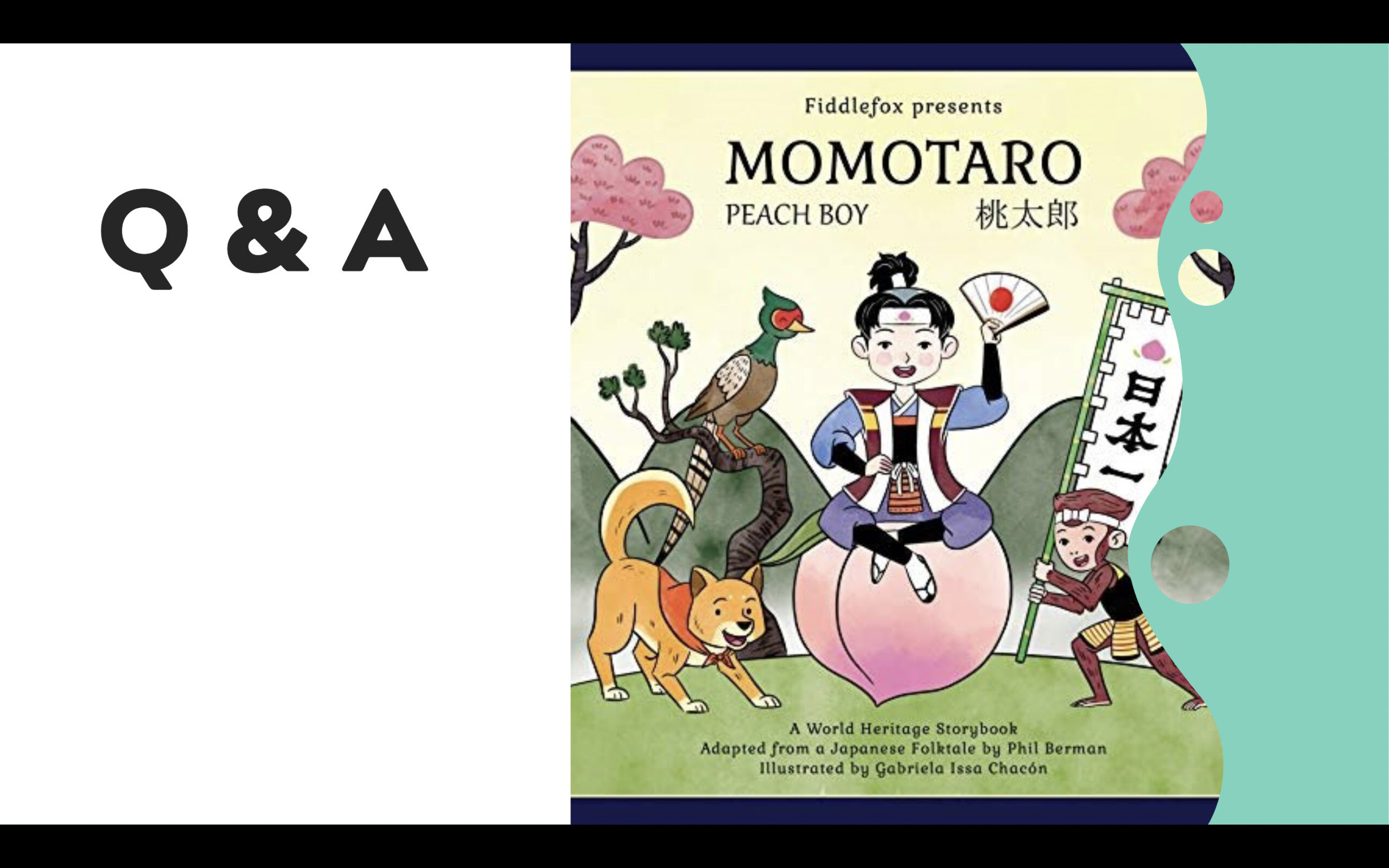 Do you have any questions about Momotaro?